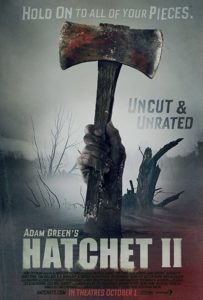 Apparently, the second Hatchet movie had some problems getting past the MPAA without deep, deep edits, most of which were taking over-the-top gore scenes and making them shorter, which for some reason is less offensive. They also pulled some mutilated genitalia scenes and about five seconds of transition from sex to necrophilia, both of which were critical to the plot.

Thankfully, the Prime Video people mislabeled the rated R version, so I got the unrated version instead.

Hatchet II is in the very small class of perfect horror movie sequels that understand how sequels should pick up immediately after the prior movie ended[1]. Final girl Marybeth is ready to plunge right back into the swamp to retrieve the bodies of her dead family folk and just maybe take revenge on the wielder of the eponymous murder weapon[2], with help from voodoo entrepreneur Tony Todd and his band of merry redneck mercenaries. Will it work? I mean, maybe, but I have it on good authority that there are (at least) two sequels left, so, well, you do the math.

In short: not as good, nor as funny, as the original, but what it lost in comedy plus originality, it more than made up in commitment to grossing out the plebes. I ain’t mad at it.

[1]Aliens gets a pass on this. “Sure”, you may be thinking, “57 years isn’t immediate!” But thanks to cryogenics, it was immediately for Ripley, and that’s what matters here.
[2] ssshhhhhhhhhh