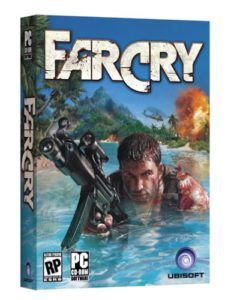 I’m probably not done yet or anything, but my spate of first-person shooters is at least slowing down a bit. Which is good, because there’s lots else I want to play, but since there’s already both a Doom 3 expansion released and a Half-Life 2 expansion scheduled for this summer, I’m sure I’m still stuck in these same woods for a bit longer.

Which made Farcry a welcome entry. No demons from hell that required a clumsy flashlight-or-weapon paradigm to fully unlock the fright potential, no transdimensional head-sized ticks waiting to leap out at you from the shadows… well, no, it really isn’t as good as the Half-Life series, so I shouldn’t deride. But it’s definitely the next best thing.

You play as Jack Carver, a Caribbean tour guide (or South Pacific? Well, somewhere with palm trees, sparkling blue yet crystal clear waters, and the occasional Japanese army skeleton or half-sunken battleship to break up the monotony…. so, yeah, probably the Pacific after all, then. Seems obvious, now that I’ve thought about it.) hired to take a beautiful young reporter on a tour of a nearby island chain. Only, before you even get there, someone decides you’ve trespassed a little too close, and blows up your boat. After that, the only thing left to do is penetrate the net of mercenaries, stop the mad scientist’s evil scheme, and save the girl. I mean, that was your best boat!

But, seriously, for the railroad scenario that all FPSes must be, this one does a pretty good job of making each next “choice” seem like the only reasonable one and even of sometimes providing multiple solution paths to each objective. But, shooting different things with different weapons, and each thing takes a different number of hits to kill it? *yawn* We’ve been here before, of course. What makes it work is the interesting storyline coupled with the deadly paradise motif. You genuinely want to pause now and then and take it all in, but more often than not, this is a bad idea. Plus, there’s a pretty good vehicle system, with everything from an inflatable raft with an outboard hooked on to a hang-glider.

I felt like it got a little too hard right at the end. I know, it’s supposed to and all, but this was essentially post-climax, which made it feel unfair. Both because I wanted to see how it turned out and because, well, I was ready to move on to the next thing. Which I will, but I only wish I knew how soon. My gametime is at a premium these days. Probably June, if all else fails.