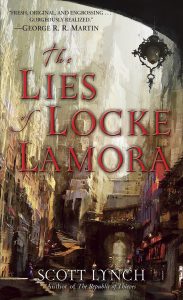 I know it’s early yet, but this year is treating me excellently for books. I suppose the most important factor is the stack of recommendations I sift through these days, which in many ways has been a factor in the improvements my reading list has seen over the past year and more. But both of today’s book and Cryptonomicon have been more frequently and more widely recommended than the average, which I figure therefore makes a bit more difference than usual. In any event, if I read the best quality of books of my life in 2008, that’ll be awesome, and if I don’t, well, that’s probably fine too. The fact that they’re better is all to the good.

I’m holding my cards pretty close to the chest here, right? There you are, asking hopefully out into the void, “Chris, how did you feel about The Lies of Locke Lamora? If you’re just going to refuse to take a position, what good is any of this?” And I mean, yeah, you’re right, I really do need to learn to take a stand on these things. Anyway, one thing I liked about it was Locke Lamora himself. It’s been kind of a while since I’ve been so attached to a character. He’s like Danny Ocean without the inherent Clooney smugness, or maybe like Vlad Taltos without the deep and potentially unlikeable personality flaws. Another thing I liked was the last hundred or so pages of constant adrenaline. I cannot tell you the last time I was so excited at work. (Plus, the rest of the book was in no way boring, so make no mistake there.) Yet another thing I liked was the inherent lyricism of the title. I mean it, just try to say it out loud without feeling like you’re presenting poetry.

As for things I didn’t like… I’m really having a hard time. The only thing that springs out at me is a couple of times late in the book where expositional history of the city was presented just in time for it to be extremely relevant to the present plot. And even that seems like an unreasonable complaint; if he were a person telling me a story, I would expect him not to think of that kind of thing until he suddenly realized it was about to be relevant and that he hadn’t told me yet. Y’know? So there’s that, and it’s still pretty much all I have.

See, and all this talking about my feelings bullstuff has made me skip actually describing the book, in which Locke Lamora and his criminal gang wander around the grimy fantasy setting city running cons long and short on rich people and on their enemies, never suspecting the far longer and deeper con that they’ve been caught in the middle of. It’s really good stuff, and you should be sure to read it.

2 thoughts on “The Lies of Locke Lamora”