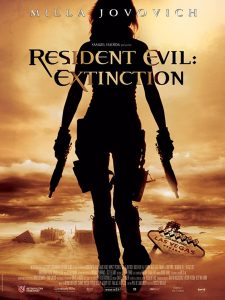 Resident Evil is one of those movies that has zombies in it. Resident Evil: Extinction, being a sequel, also has zombies in it. Therefore, I can be expected to like it. (In some things, I am pretty predictable. For what it’s worth, though, Redneck Zombies was not very good.) Despite that, I think that this movie was not only a decent action-horror piece, but that it furthermore surpassed that apparent goal. Not enough to say it’s great and everyone should see it, but how many movies surpass even modest quality goals that they set for themselves?

So, Milla Jovovich is once more wandering, sporadically nudely, through a zombie-infested nightmare unleashed by the multi-national Umbrella Corporation. Except it’s been a few years since this all started, and said nightmare is now a globe-spanning concern. Also, I guess it affected the weather or something, because the majority of the planet has dried up into desert. Although, let’s be honest, the real reason for this is what Mad Max taught us decades ago: deserts and apocalypses go together like Milla Jovovich and being naked. Faced with the twin horrors of zombification and global warming, the human race has pretty well called it quits, aside from roving bands of heavily armed warriors out on the roads, if you know what I mean. And there’s Milla, trying to work out how to proceed, discovering some new talents, and finding out that Umbrella isn’t quite done with her yet. As fans of the series are already aware, this is the kind of thing that (naked or not) she really doesn’t take lying down.

As a result, you have reasonably decent special effects, more action than you can shake a pointed stick at, everything you’ve come to expect out of a zombie movie[1], and the best girl-fighting scenes this side of Summer Glau. Like I said, when taken across the scope of all 2007 cinema, these are fairly modest aspirations to meet. So that’s cool that they do so, and you end up with what you wanted: a good action-horror flick. Now, stay with me, because you’ll find this next part hard to believe, but I maintain that’s it’s true.

This volume of the Resident Evil series also has a meaningful theme. See, Alice[2] is stuck in a holding pattern. She’s free of Umbrella, sure, but the world keeps getting worse and being free isn’t really all that great when you’ve got a dying planet as your only “on the outside” option. The majority of the movie is her quest to break out of that holding pattern and find a way to make things different than they are. Which sounds all fine, but I could just be reading it in, right? Except, I’m not, because every Umbrella scene has brought us full circle back to the original events of the outbreak. Same spooky mansion. Same giant underground complex. Same AI attempting to orchestrate events. Everything Umbrella stands for in this movie and every action Alice takes in response to the external stimulus of her doomed earth are the visual representations of the spiritual struggle happening in Alice’s psyche: until she faces the past in an almost literal fashion, she’s not going to be able to break the chains of the present and get a move on towards a future in which maybe humanity won’t be extinct after all.

See? Not only theme, but below-the-surface theme. Despite having moved well beyond the game franchise’s rails (or, more likely, because of this), these movies remain the best video game adaptations on the market, and by a fair margin. Also, and I may have forgotten to mention this, but sometimes Milla Jovovich takes her clothes off.

[1] That one guy who gets bitten but doesn’t tell anyone so that he can end up turning at the least opportune moment, the annoying people who are more dangerous to their fellow humans than the zombie plague, etc.
[2] This is the name the movie uses to refer to naked Milla Jovovich. Well, also clothed Milla Jovovich.