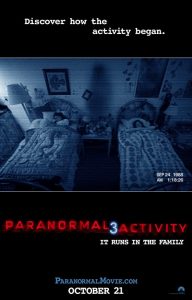 Sure, the movie too, but there is something downright unsettling about silent closing credits. Of course, maybe that’s only true if the movie was unsettling first. It’s cool, though, Paranormal Activity 3 was. Remember how there was a demon afflicted family in 2006, these sisters who had boyfriends that liked to film the creepy stuff that was going on around them and they made vague references to similarly creepy things that happened to them when they were kids?

Well, that’s a fact. If anything, stuff was sufficiently creepy as to make me wonder if I should go back, watch the original two films, and try to find continuity errors, because seriously, these people lead severely fucked up lives that they maybe should have been willing to talk about a little bit more, maybe to therapists and exorcists? It wasn’t as good as either of those movies, alas, but really I’m completely a slave to the first person camera horror genre at this point, so I’ll see it no matter how bad I expect it to be or, indeed, am told it is by trustworthy people. Still, now that I have squandered any shred of credibility, I nevertheless thought this was pretty good.

[EDIT from 2021: Confirmed, this does not especially well fit the continuity of the first two movies at all. Unless you account for brainwashing, which is pretty plausible to be honest.]