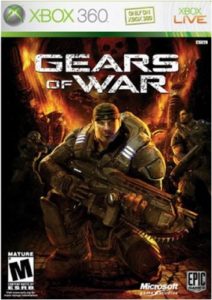 The day is coming when I’ll feel obliged to cross-reference some games with the movies section. The last couple of Zeldas fall into that evolving category, as does Halo 2. As, also, does Gears of War. On a class M somewhere out in the galaxy, humans are living out a reasonably Utopian existence. (Utopia looks like a sidewalk cafe in Paris in the springtime, apparently. If you remove the Parisians, then, fair enough.) The problem with Utopia, in this case, is all the humanoids and beasts living below the surface of the planet who decided one day to erupt onto the surface and smash human civilization. Now, some years or decades later, the military remnants continue their struggle against, um… the bad guys. No, seriously, I can’t remember. Ah, okay, it’s the Locust Horde. (I can only assume they call themselves something else.)

The actual in-game story is quite a bit more awesome than the, for now at least, cardboard premise. A squad of marines is tasked with penetrating Locust defenses to retrieve a potential doomsday weapon that has been lost behind enemy lines when the helicopter transporting it was shot down. Although only two are playable, all of the six or so characters has sufficient depth to be in a video game; that is, you care what happens to them and hope they don’t die. The story being about as grim and post-apocalyptic as it sounds, don’t count on that hope winning out, though.

As far as gameplay? It’s really pretty cool. I felt more present than I have in the majority of first-person shooters, despite it being a third-person. The maps being open enough for true flanking and the easy-to-use cover system make the repetitive parts of the game (where you repel this or that wave of enemy attackers before proceeding to the next such wave) not only tolerable but genuinely fun again, and the non-standard parts of the game where you’re dealing with the things that come out after dark, the unkillable aliens, or the ginormous spider all have sufficient tension and uniqueness of play to rival anything I’ve hooked a controller up to. Plus, yay, it’s a current-gen game, so you don’t have to hook up controllers anymore. And not a moment too soon.

7 thoughts on “Gears of War”