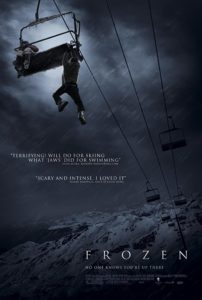 There’s this movie, Frozen, that you’ve never heard of. I had never heard of it before it showed up on my list of ‘movies to see on a Wednesday afternoon’ last week. And even though I found the idea of college kids trapped on a ski-lift during a winter storm to be extremely compelling, pretty much nobody else did, at least by appearances; I’m pretty sure it won’t even be showing in area theaters anymore by tomorrow. What’s cool, though, is that for movies that nobody much has heard about, I get to be the representative of the film in a way that my review of, say, Avatar holds no comparison to. And it’s not like this is uncommon for me; I watch a fair number of movies that are outside the mainstream. But only every once in a while do I see a movie that people maybe haven’t heard of, but should still actually watch.

Except, I’ve already told you most of what you need to know about Frozen, and where does that really leave me? I mean, the plot is kind of predictable. Of course they’ll get trapped on the ski lift in some unlikely way. That’s the premise! And of course they’ll have moments of rescue that are dashed away. That’s the genre. But eventually the reality of the situation sets in[1], and then you have a compelling glimpse at physical danger, emotional collapse, and the ways that people react in the face of death. And even before that reality hits, the film is at times brilliantly shot. I shouldn’t spoil the scene I’m thinking of, as it’s quite affecting. But, like the rest of the movie, it really drives home the tagline, which I will repeat here instead of relegating it to mouseover text as usual: “No one knows you’re up there.” In a way, that simple fact is more terrifying than all the snowstorms, fifty foot drops, and razor-sharp cables in the world.

[1] Interestingly, at least to me, I think this happens for the audience before it happens for the characters. Or maybe it is just my personal experience with a superficially similar situation that made me sensitive to it.