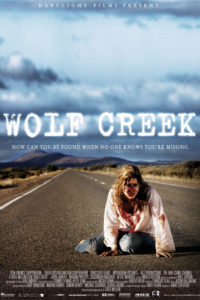 Busy movie week. I basically ran the gamut of movies that can be described as ‘based on true events’, and yet the core element of them was identical. That is to say, murder. It is possible that this says something about my deeper taste in film. It is also possible that this has already been said, again and again.

Out of Australia, the chilling true tale of three vacationers in the western part of the country who stumble upon their doom near the meteor crater at Wolf Creek. Shades of Chainsaw, sure, but how can you avoid that when you’re talking about plausible serial killer activity framed as a horror movie? The job here is to take the tension, and ratchet it higher and higher. For two thirds of the movie, there was success, and I can’t ask for more than that.

On the downside, it was constrained by the actual events in a way that a less literal film like Chainsaw doesn’t have to be, and to its detriment. We have a point A and a point B, and no way to know exactly what happened in between, so the writers had to make up something that was both exciting and true to point B at the same time. This is only possible if you artificially inflate the stupidity quotient of the principles. So, whatever else good I can say about it, I cannot say it’s smart. Still, it’s a horror movie, so were you really expecting me to?